Our Patron Saint, Our History, Our Campus

St. Apollinaris was a bishop, martyr, and possible disciple of St. Peter. He was mentioned in the Acts of the Apostles. Apollinaris was born in Antioch, Turkey, and became the first bishop of Ravenna, in Italy. As such, he faced nearly constant persecution. He and his flock were exiled from Ravenna by Emperor Vespasian. On his way out of the city he was identified, arrested as being the leader, tortured, and martyred. St. Apollinaris died in the first century. 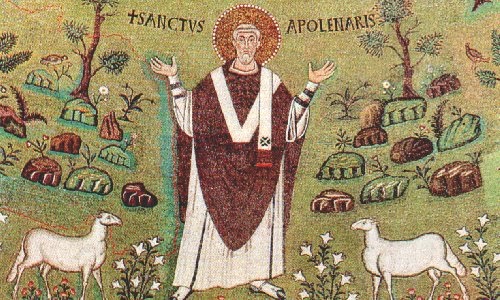 St. Apollinaris Catholic School, established in 1959, is located in Napa, California, Diocese of Santa Rosa. The school was staffed and run under the leadership of the Sisters of Mercy of Loughrea, County Galway, Ireland from 1959 to 1991. Father Michael Cleary, who had been the pastor since 1985, was instrumental in the growth of the parish and school, including the addition of our gymnasium and communications lab, until his death in 2001. Monsignor Joseph Alzugaray succeeded him as pastor. In 1991, the leadership of the school was entrusted to the first lay principal, Mrs. Patricia Granucci, followed by Mrs. Connie Howard. We are now honored to have Mrs. Olivia Brazil serving as our principal. The majority of families are members of St. Apollinaris Parish. The Sisters of Mercy tradition that began 50 years ago continues to provide students with an outstanding Catholic education within a supportive, caring school community.

Set on 10 acres in a peaceful Napa neighborhood is St. Apollinaris Catholic School and Church. We are blessed to be part of a thriving parish and our students benefit from our close relationship in many ways. Facilities for our Transitional Kindergarten through 8th grade include ten spacious homerooms, a science lab, a state of the art communications center, library, full sized indoor gymnasium, oversized grass playing field, playground structures, extended care center, and use of Father Cleary Park within the grounds for celebrations and small group instruction.